South Florida is known for its tropical climate and beautiful scenery, but did you know it has some of the best festivals in the Sunshine State? From arts and crafts to medieval times, south Florida and the Fort Lauderdale area have a different kind of festival for just about everyone in the family. Here are just five of some of the top annual festivals in and around Fort Lauderdale. 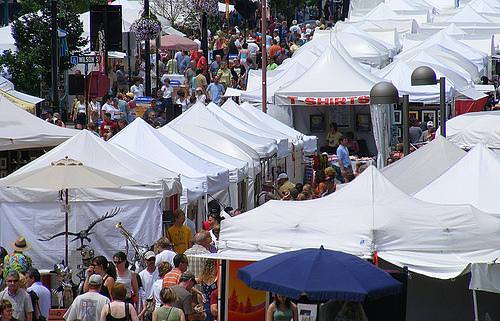 Every year, downtown Fort Lauderdale hosts the Las Olas Art Fair, which fills Las Olas Boulevard with art and artists from all around the country and world. Whether you’re looking for a new painting for your home or you just like browsing eclectic art, this is a can’t miss fair.

Celebrating its 26th year, the Las Olas Art Fair is a great chance to enjoy the weather and experience different cultures and styles from the world of art. All the shops and eateries lining Las Olas Boulevard open their doors, which makes the art viewing experience that much better.

If the medieval times is your idea of a good time, then the Florida Renaissance Festival can’t be beat. It takes place every year from February to March and it’ll definitely give you and the rest of the family a taste of the 16th Century.

The festival has an artisans’ village complete with glassblowing and blacksmith demonstrations. Likewise, there are daily jousting events, archery shows, and enough turkey legs to feed the entire kingdom.

For film lovers and movie buffs alike, the Fort Lauderdale International Film Festival hits the city’s big screen every year from late October to early November. Now in its 29th year, the acclaimed film festival boasts feature lengths films, documentaries, and shorts from all around the world.

Thanks to the success of the film festival, Fort Lauderdale is now the proud home of Cinema Paradiso, a 230-seat, year-round art-house theater. So, whether you’re just visiting Fort Lauderdale or thinking about relocating to its sunny shores, the International Film Festival is a great reason to see what the city is all about.

There’s nothing better than sunshine and cold beer, which is exactly why the Fort Lauderdale Beerfest is such a blast. The Beerfest is in its 17th year and offers craft and specialty beers from across the United States and the rest of the globe. On top of that, there’s plenty of live music and a variety of food for all beer enthusiasts.

If great weather and fun festivals are your thing, then Fort Lauderdale is the perfect spot for you.